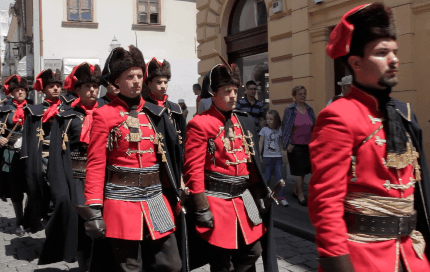 Zagreb, Croatia is a place which is definitely worth a visit for a day or two. Its cute streets, quirky traditions and lovely restaurants make it a perfect city to get lost in for a day, before continuing to the coastline and those famous beaches.

In Zagreb more than anywhere else on this trip, we stumbled upon things everywhere. There was something around every corner – the city really felt alive and vibrant.

Just walking around the Dolac market early in the morning, buying some fresh fruits and freshly baked pastries and sitting down to watch the action flow past.

A perfect place to start the day in Zagreb and get a feel for the city.

What we liked the most about Zagreb were all of its traditions and legendary stories. More often than not descriptions for places in Zagreb – in the guide book – would begin with ”According to legend…”

Everything in Zagreb had a myth, legend and a story – and while we thought it was “cute”, the locals took these legends very seriously.

The firing of the 12pm cannon, for example: every day they fire a cannon from a tower on top of a hill, but nobody knows why or when this tradition began.

The fact that they fire off a cannon with a souring loud noise every day for no specific reason is hilarious.

The Stone Gate is another example – today the stone gate, which separates the upper and lower town, serves as a chapel.

People come here to light candles and pray in front of a painting of St Mary and Jesus which was saved in 1731 after a fire burnt everything down.

Whether you’re religious or not you can feel that the vibe here is very special: holy, some would say – emotional, is what I would call it.

No matter what time of the day you walk past, the small tunnel will be filled with locals in all ages; kids, teenagers, elders.

They all come here, light a candle, pray in front of the miracle painting or by the seats in the corner or leave some flowers by the altar.

The first thing that happened when we checked in to the hostel was to be brought a plate of ”assorted” local shots to try, as that is the custom when having guests.

There were the “girl shots” and “men shots”, but it didn’t really matter as long as you drank it.

When we later took the tram into town the first thing we saw was a big group of guys and girls in their early 20’s fully dressed in folk dresses singing traditional folk songs, together with a crowd who knew every word in the lyrics and sang along.

The changing of the guard in Zagreb is another example of tradition taken to the next level.

Their dedication and flamboyant outfits makes London’s changing of the guard look lame.

It goes on for two hours (!) and they walk around the whole center of town, stopping at squares, correcting their hats and capes, drumming their drums while they pass the crowds on their horses.

Everywhere in parks and on squares, there were couples kissing – they were lying or sitting on top of each other, guys with their t-shirts off and arms and hands everywhere.

I don’t know why this was, but it was so funny, and while we felt a little embarrassed when sitting close – nobody else seemed to care at all!

In Zagreb more than anywhere else on this trip, we stumbled upon things everywhere. There was something around every corner – the city really felt alive and vibrant.

Just walking around the Dolac market early in the morning, buying some fresh fruits and freshly baked pastries and sitting down to watch the action flow past – was a fun, cultural experience.

After having shown our tickets and passports countless of times on the same train, we arrived in Zagreb, Croatia and ended the week there.

Most people tend to head straight to the coastline when coming to Croatia, but we decided to go to the capital. I know we might say this often, but this place was AWESOME!

The first impression wasn’t too nice, with really intimidating police officers and rundown buildings as a view from the train window.

But once we got off the train and entered the city, all of that changed very soon.

The first person we spoke to broke up in a big smile and said hello to us in German (for some reason?), the first thing that happened when we arrived at the hostel was to get a welcome Rakia shot and Croatian homemade cookies.

Zagreb has the cutest streets

Strangest traditions and the cultural people made the city feel so vibrant and alive.

Besides, beer for 1 Euro and a restaurant meal with salad and dessert for 4 Euro wasn’t too bad either.

The biggest thing I’ve realized is that to find a place to live cheaply, you don’t have to go all the way to Asia or South America – Europe has them too.

I knew eastern Europe was cheap, but it’s a different thing to know it than to see it for yourself.