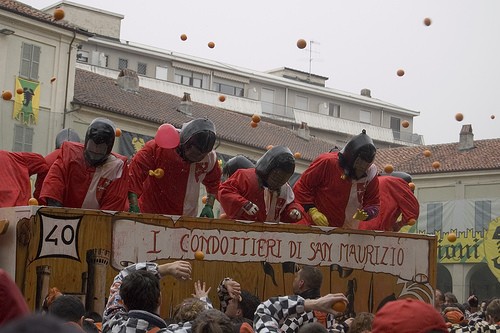 Weird Events In Europe – Now that Tomatina was held recently in Spain and Oktoberfest is coming up in Germany, I thought of all the crazy festivals, events and competitions held in the world, and how much fun it would be to visit them.

Europe is full of crazy events and bizarre festivals, and while Tomatina and Oktoberfest are very well known, there are more than a handful of events you might never have heard of …Europe Travel Guide

La Tomatina in all it’s honor, seems like an awesome festival and I really would love to go there, but we all have to agree that having a tomato thrown in the head is a lot less painful than a bloody orange!

This less-known fruit throwing battle is held in the city of Ivrea in Italy, where hundreds of people get out on the streets to re-enact The Battle of The Oranges.

The festival is held in March every year, maybe I will see you there next year. 😉

Festival Of The Pig – France

Every year on the second Sunday in August in Trie Sur Baise in France, they have a whole festival in honor of the pig.

If you love pork this is your heaven: here you can feast in everything porky, and if you want to totally lose yourself in the feast then join the “pork-sausage eating contest” or “best pig squeal competition”.

I’m not joking, the rules to the piggy squeal contest are that the noise must represent a moment in a pig’s life – from feeding to reproduction, to death.

This festival sounds like a freak-show, and you’re more than welcome to pig out!

If there is one place with the most strange championships it’s Finland.

As if two bizarre championships weren’t enough they also have an Air Guitar World Championship, where you compete in the best performance.

Yes, but it attracted 7,000 people this year, and can that many people be wrong?

Oh wait, there is more.

If you don’t care much for your cellphone, why not join the Cellphone Throwing Championship?

Yes, they have one of those too in Finland, and you get rewards for style and choreography..!

This contest/festival celebrates the ancient rivalry between Lancashire and Yorkshire – the aim of the game is to knock down Yorkshire puddings of a 20ft ledge by throwing Black puddings at them.

This is not a new and wacky festival to get attention, but dates back to the 1850s.

Of course there are heaps of bands playing in the small town during the contest, which was actually held in Ramsbottom yesterday (the 11 of September).

Don’t make the natural beauty the only reason for your highland holidays in Scotland, although the small island where this strange festival is held is rather interesting just in itself.

The Stone Skimming World Championship is held on Easdale island, which is situated on the west coast of Scotland, and it’s the smallest inhabited island of the inner hebres, with no roads, no street lighting and no cars.

The festival is a huge thing for the island, and along with the champion ship they hold a festival with pre-skim party and live bands.

This year’s World Stone Skimming Championship will take place 25th of September and anyone is allowed to enter – so why not do something different than just staying at one of the holiday cottages in Scotland and going for hikes like everybody else – instead become a world champion!

Have you heard of any other weird, strange, funny events?

Today it’s OK to be a bit creepy, so I would like to take that opportunity to confess my fascination for cemeteries.

Visiting a cemetery on your holiday or med cruises might not be on the list of things to see in a new place, but when we’re talking cemeteries, there are some that truly stand out, and definitely deserve a visit even for those who usually aren’t interested in them.

This cemetery is recognized for being Europe’s most beautiful cemetery, with cupolas, arcades, statues and the church in the entryway truly makes this cemetery live up to expectations.

Mirogoj is not only a cemetery but a beautiful park and art gallery, but the most beautiful part is the green vegetation which has taken over and plants climbing over the walls and in the ceilings, giving it a romantic touch.

There are many famous cemeteries in Paris, but this is perhaps the most famous one.

Located in the east of Paris, Pere-Lachaise is the resting place for many famous people, all from rock stars like Jim Morrison and French singers like Edith Piaf, to play writers like Moliére and Oscar Wilde.

Many fans come here to put a flower by the celebrities graves, or to pose next to it.

We just met a family who had taken one of the many family cruises in eastern Europe, and had also visited Sapanta in Romania and the Merry Cemetery – they said it was one of the highlights on their trip, and I can see why.

When someone dies people tend to idealize the person and their flaws are forgiven and forgotten, and often nobody speaks of how the person died. Well, in Merry Cemetery this is not the case…

The cemetery hold over 600 wooden crosses with bright, colorful and cheery pictures of the deceased and often of how they died, whether it was getting hit by a truck or beheaded, reveling dirty secrets of the dead person.

Together with the images are quirky poems about the deceased, some which are surprisingly honest:

“Ioan Toaderu loved horses. One more thing he loved very much. To sit at a table in a bar. Next to someone else’s wife.”

On another cross it says:

Underneath this heavy cross.

Lies my poor mother in law.. Try not to wake her up.

For if she comes back home.

She’ll bite my head off.”

Kovaci cemetery is perched on top of the hill overlooking Sarajevo.

It’s a nice walk along the streets up to the cemetery, and from the hill you get the best view in town.

It’s a beautiful but sad sight.

The white gravestones are tucked closely together down the steep hill, with a cupola in the middle.

Walking among the graves is a sobering experience, as those who died all died during the war in the 90’s, and many were very young.

Sarajevo is a city that has gone to hell and back, a city trapped from all sides, where they targeted anything – you weren’t safe anywhere, and this is a reminder of that.

The Old Jewish cemetery in Prague is the second oldest in Europe, established in the first half of the 15th century.

Today it contains over 12 000 tombstones, although the number of buried people is a lot higher.

Because of the lack of space (they couldn’t afford buying more land) they had to bring in soil to add further layers, and because it’s against the Jewish religion to destroy old tomb stones, when a new layer of soil was placed on the existing graves, the old tombstones had to be taken out and be replaced upon the new layer.

This explains why the tombstones in the cemetery are placed so closely to each other, and today the cemetery has 12 layers of graves!

There are quite a few beautiful cemeteries in London, but this one is special because of the eery vibe and beautiful wild nature.

The whole place smells of sweet peas, and there are many interesting but creepy stone angels and sculptures.

It’s a nice stroll in the day, but I wouldn’t recommend visit after dark, far too dodgy!

Have you been to an interesting, beautiful or creepy cemetery?

Tell us about it!

19 thoughts on “Weird Events In Europe You Must See”