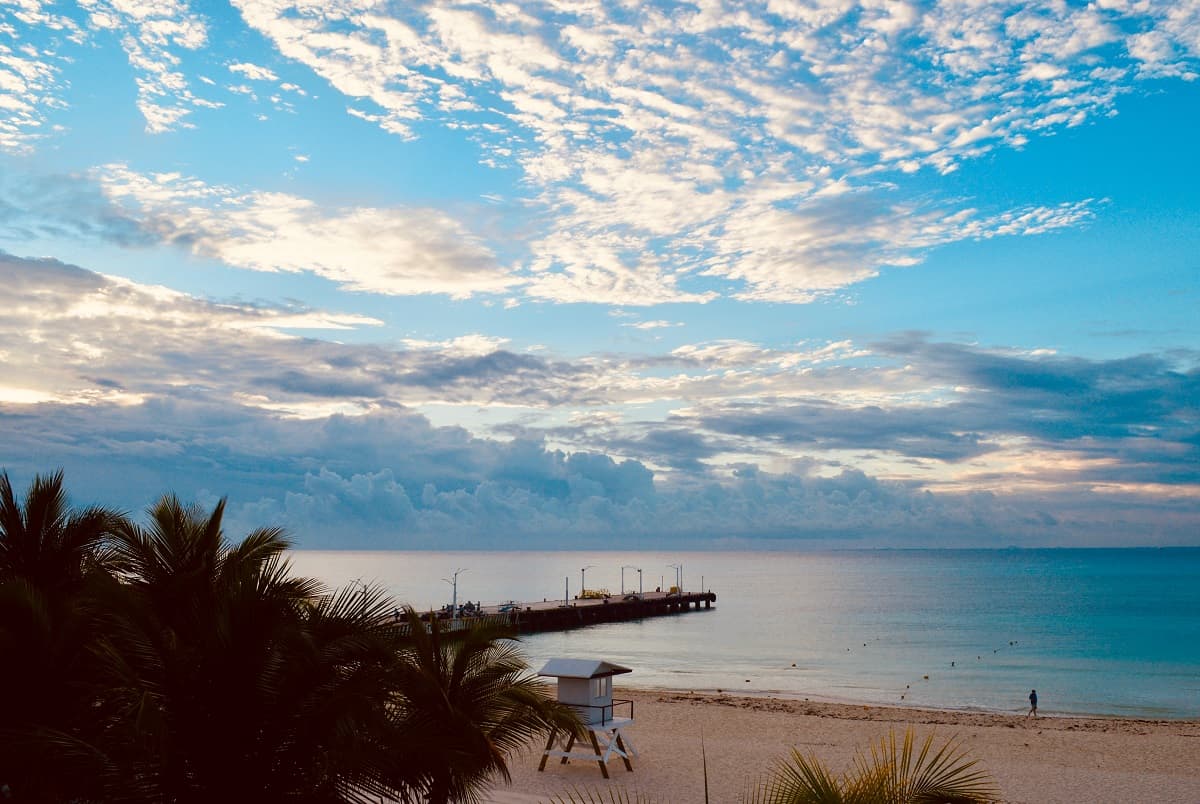 If you’ve been searching for your next vacation spot and believe that Cancun would be a great destination to travel to, you should first learn more about what the weather is like in this city.

By understanding what the climate and weather of Cancun are like, you’ll be able to schedule your vacation for a time when the weather will be at its best.

Located in southeast Mexico, the city of Cancun has a tropical climate, which means that there is very little difference between the four seasons.

The primary difference that you should be aware of when traveling to Cancun for a vacation is that there are separate and very pronounced dry and rainy seasons.

On the other hand, the temperatures are generally hot during the entire year, which means that you’ll want to take ample amounts of sunscreen with you.

The average temperatures throughout the year are just above 80 degrees Fahrenheit.

However, some of the heat is mitigated by sea breezes, which should keep you comfortable while you’re on your vacation.

If you’re planning on taking a swim while in Cancun, the weather in Cancun Mexico is wonderful for the temperature of the sea is almost always warm because of how the Yucatan is continuously bringing in warm water from regions further to the south.

The temperature of the sea water oscillates between 79-84 degrees Fahrenheit no matter the time of the year.

Before you travel to Cancun Mexican, it’s important for you to know that this city can be impacted by tropical storms on a regular basis because of its location.

The tropical storm season runs from May through December.

However, Cancun doesn’t get hit by severe hurricanes that often.

In fact, the last major hurricane to cause extensive damage in Cancun was Hurricane Wilma in 2005.

There’s also a significant amount of warning before a tropical storm or hurricane hits Cancun, which ensures that you have time to change your plans should the need arise.

Cancun is a gorgeous destination during any month of the year.

Even if you visit during a month that’s sunnier and drier than most, there’s always a possibility that it could rain, which is why you should consider upscale Cancun vacation rentals for your vacation.

The Weather in Mexico Cancun

Located on the northeast coast of the Yucatán Peninsula of Mexico, Cancun is a lively and vibrant land of sunshine, beaches and cultural delights.

As such, it has become one of the primary tourist destinations in the Region.

More than that, boasting the beautiful weather that characterizes the Caribbean sea, Cancun is one of the most active tropical tourism spots in the world.

Outside of a few short storm-heavy periods of time, the city can be visited and enjoyed all throughout the entire year.

If ever it rains, a stay at one of these rentals ensures that you’ll have a great time even when you need to stay indoors.

In fact, businesses in the tourism industry like hotels, bars and restaurants are open most days on the calendar.

That is not to say, though, that there aren’t some important weather-related differences in Cancun that depend on the season.

Like almost all tourist destinations in the world, the place has high, medium and low seasons.

During high seasons, more people will travel to Cancun, resulting in more elevated prices all around.

There are various factors that play into this differentiation, including the date of popular holidays, mass vacation periods and, of course, the weather itself.

Without a doubt, it’s very important to take the weather in Mexico Cancun into account before booking a flight and a hotel room.

Before going into a more nuanced description of the weather Cancun Mexico, let’s get something out of the way:

The Weather in Mexico Cancun is Almost Always Tropical Hot

As a matter of fact, the average temperature in the region is 80 degrees Fahrenheit (27 degrees Celsius).

What is more, a great majority of days in Cancun have clear blue skies and very little wind.

Normally, the exception to this rule only takes place when there is a full-on rainstorm.

On average, these Cancun rainstorms happen only 25 days a year, leaving 340 days of sunny and relaxing bliss.

Going more in-depth, it can be said that most people would say that November is the best month to visit Cancun.

That is because of the fact that Cancun weather in November is nice and warm without being too hot, and there is almost no chance of rainstorms taking place during this time.

Even more than that, November in Cancun comes right after the rainy season, meaning that everything looks green and beautiful during the entire month.

As if that wasn’t enough, despite the nice Cancun weather in November, the month is not high season yet in the area, resulting in more affordable prices all-around.

If November is too early in the year for you, though, don’t worry.

Cancun weather in December may not be as ideal as during the previous month but it’s still pretty much fantastic.

In fact, Cancun weather in December tends to be very sunny, with temperatures ranging from 75 to 90 degrees Fahrenheit during the day.

This weather basically maintains itself until April, when the high season ends.

Despite being at its lowest, Cancun weather in January is still warm, sunny and beautiful.

During this month, the sun goes down relatively early at around 6:20 or 6:30 PM, producing some of the most beautiful sunsets you will ever see in this part of the world.

At this time of the year, however, the city is at its fullest and its prices are at their highest.

For that reason, if you want to enjoy the Cancun weather in January, take your precautions and book with advance.

However, it should be noted that Cancun weather in February begins spiking up, and it reaches its peak during July or August.

Without a doubt, the best thing about Cancun weather in February, March and April is that it heats up the water beautifully.

Likely the best aspect of planning a vacation to Cancun is that the temperatures are remarkably consistent throughout all months of the year.

If you visit during the slightly cooler months from November to March, the average highs range in the 80 degrees Fahrenheit.

Because of the sea breezes that come inland, visitors to the city should be very comfortable during the late fall and winter months.

The hottest months of the year are July and August, during which the average high temperatures top 90 degrees Fahrenheit.

The average low temperatures for the year are right around in the 70’s degrees Fahrenheit.

However, the months of December through February can become quite cool at night with low temps in the upper 60’s degrees.

You should also take humidity into account when planning your trip.

While July and August are considered to be the hottest months of the year, May and June have much more humidity, which you should keep in mind.

On the other hand, the wet season lasts from May to October.

During the dry season, February and March are particularly dry with total rainfall below two inches per month.

These months are also a great time to visit because of the cooler temperatures.

However, the lack of rain since November means that the jungle landscape around Cancun Mexican isn’t as green as you might expect.

If you want to visit at a relatively dry time of the year but still want to be able to take beautiful pictures of the scenery, November is likely the best time to visit.

The months with the most rain include September and October, which come with total rainfall amounts of 9-10 inches per month.

However, the weather in Cancun is somewhat unique in that there can be very heavy rainfall for a couple of days and then nothing but a spotty shower for the next two weeks.

With this in mind, you should be able to visit Cancun Mexico at any time of the year without much issue.

Now that you have a clear understanding about what the weather is like in Cancun, you can start planning your trip accordingly.

Cancun is among the most beautiful cities in Mexico and is certain to be a great place to visit no matter when you travel there.