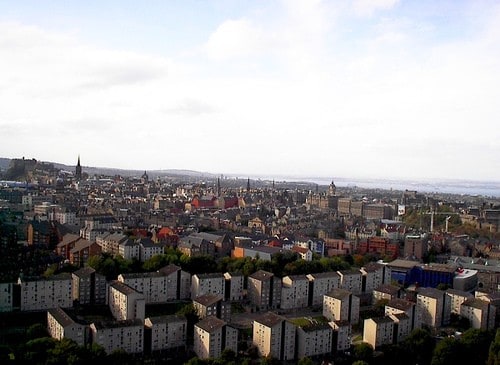 With over 20 million visitors per year, Scotland is a popular destination with visitors from all around the world, and with so many things to do in Scotland it comes as no surprise. 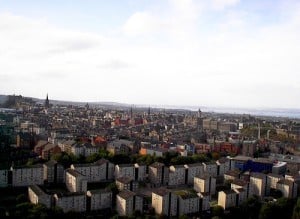 The capital city of Edinburgh is the most visited city in the UK outside of London.

With such a small country having such a vast number of visitors each year, it can be hard to escape the tourist trail and experience Scotland off the beaten track.

As both a local girl, and a travel writer, I thought it would be useful to combine my knowledge of my home country and experiences as a traveler, and give you my top things to do in Scotland.

We knew Scotland would be beautiful even before we stepped off the plane – just from what we saw 2000 ft in the air was enough to know that this spontaneous trip would give us experiences of a lifetime.

We decided to leave the backpacks behind this time and travel with roller bags instead, just to see how we felt about it.

We don’t like to see ourselves getting comfortable with only one way of travel, but want to try out different styles all the time.

Although we have been traveling mostly in a backpacker way I wouldn’t mind experiencing a bit more of that luxury travel style, and although we are not the typical hikers we don’t mind trying that out either.

The only thing is that we are just never prepared for it – although we have become better over the years, like don’t go hiking in flip flops in the Austrian Alps anymore, we still looked like the odd ones out, and in Scotland, once again we were not prepared …

Edinburgh is in our opinion one of the most beautiful cities in Europe, and while the weather might not always be the best with the cold winds and rain – there are so many things to see and do there in any type of weather so it doesn’t really matter when you visit.

Some highlights on a trip to Edinburgh is to stroll around the narrow cobbled streets of the old town, visit Greyfriar’s Kirk, check out Mary King’s close and the Edinburgh castle.

But there are many more things to see and do, two good places to warm up in and escape the cold are the Camera Obscura and the Botanic Gardens – the first is both fun and interesting, with the oldest tourist attraction in the city.

The Botanic Gardens has a huge glass house area where you can explore flora and fauna from all over the world, from the desert in Australia to the Amazon jungle.

The Auld Reekie (smokey city), like it was once called, was a city bursting with history.

The black stains on the buildings in the Old town marked the evidence of just how polluted the city once was, and the narrow closes (alleyways), leading the curious visitor into a labyrinth of small streets, are still there preserving the town’s medieval layout.

Edinburgh is often referred to as the most haunted city in Europe, perhaps because around every corner there is a story to tell.

I don’t think I have ever learned so much about a city’s history through stories and tales as I have of Edinburgh.

And the fact that the city has preserved so much of its medieval architecture and style made it easy to imagine what it must have been like living back then. Attending the Edinburgh Fringe Festival is an unforgettable experience

Every year, thousands of tourists visit Edinburgh Castle, and from the outside it is really a stunning sight, but trust me when I say the 14 GBP entry fee is really not worth it!

The inside of Edinburgh Castle is mediocre at best, and the fact that you can gain free and/or cheap entry to most of Scotland’s other more beautiful castles is as good a reason as any to venture elsewhere.

Stirling Castle is only 31 miles from Edinburgh city center, and is simply stunning!

Remains were also found in Stirling Castle recently of an old Scottish Knight, and the Castle continues to provide much of an insight in the history of Scotland.

The Isle of Skye

In particular, my favorite area of Scotland and offering some of the most beautiful scenery is the Isle of Skye. To describe Skye would be an injustice to its beauty. The best thing I could say is just to see it for yourself.

The best way to see this area is to head into the Highlands for a couple of days, staying in traditional highland cottages like the ones you can find on: Scottish-cottages.co.uk and go for walks or drive around the area.

The highlands is a very popular place to go hiking, and while some people choose to spend several days hiking, you can base yourself in one place and take day hikes around the area.

Fort William is a good base for nature lovers, as you can also enjoy some mountain biking and in winter even some skiing.

There is also a pretty famous whiskey distillery and cruises that take you to see the highlands from the water.

Go Skiing in the Cairngorms

Scotland is by no means a warm and sunny country!

In most cases this would be a huge downside, but what it does provide is some great opportunities during winter to do some skiing in the Cairngorm Mountains, and National Park.

Aside from just being a beautiful place to visit in the Scottish Highlands, and situated near to the picturesque town of Aviemore, the Cairngorm mountains also offer some black slopes for some of the most experienced skiers.

Tunnocks is a company that has been around in Scotland since before war time, and I can honestly say they produce the best biscuits/cakes in the world!

Tunnocks tea cakes in particular are simply yum, and the wafer biscuits are also good too!

They are unique to Scotland, with one large chocolate factory based near Glasgow.

Waiting lists to get a tour of the chocolate factory are over a year long, so its unlikely you will get to do the tour if you are only here for a little while, but most shops in Scotland sell the biscuits so be sure to give them a try!

One of the popular things to do in Scotland is to try out some local Haggis.

Internationally it is the one dish signified with Scottish culture, but in reality, most local people only eat Haggis on Burns Night (Robert Burns Night) or on a special occasion.

It may be basic, but I literally don’t know any Scottish people (apart from vegetarians) who don’t have this in their top 3 meals of all time!

It’s the kind of thing your granny or mum would serve you!

Irn Bru has been around in Scotland for over 50 years!

For those who don’t know, Irn Bru is the only soft drink (except from a beverage in Mexico) which outsells both Coke and Pepsi in its homeland.

It’s something which is very unique to Scotland, and is regarded as Scotland’s national (non-alcoholic) drink.

Most locals love it, and most tourists hate it, but it’s something I definitely recommend you try, and that is unique to Scotland.

Inverness airport is 8 miles east of Inverness, with excellent transport links into the city center.

The airport serves the main UK airports and an expanding number of international airports.

Flights from Inverness to Gatwick leave regularly making Inverness a convenient destination for those travelling from the South of England.

There is also a train station in the city center, with direct services to Edinburgh, Glasgow and London from the south and Aberdeen from the east.

It’s also worth checking out the bus operators CityLink, Megabus, National Express and Stagecoach Bluebird that also do routes in and around Inverness.

I have never seen such a moody weather anywhere else in the world. The weather can change from sunny to rainy, windy to calm, freezing to warm – in a matter of hours!

Sometimes it seemed as though it did all that at the same time, and without any rain gear things got a little complicated… but I guess it’s the weather that has contributed to the amazing nature in Scotland.

The scenery in Scotland is simply breathtaking – the highlands is a dream landscape, with mountains, lochs and glens, and the vibrant autumn colors just made it even better.

The grey stone cottages along the roads just enhanced the scenery – these cottages were built for sitting in front of the fire, sipping tea and dipping short bread all day, the perfect situation for cozy Autumn luxury holidays.

But the one thing that struck me the most about Scotland, what changed my whole perspective on things – were the people we meet.

I always used to believe that the way the people acted was a reflection on how the weather was – the people from northern Europe like Scandinavia are in general very quiet people whom are difficult to get to know.

You won’t see them start conversations on the bus stop or street with strangers, you will notice that they prefer having an empty seat next to them on the bus etc.

During summertime, that changes a little, and the people become more outgoing. So I used to think that it had to do with the weather.

But when I arrived in Scotland, I was proven to be terribly wrong – Scotland has the strangest weather in the world, mostly quite miserable – yet the people are among the warmest and friendliest I have ever met.

Nowhere else has it been so easy to meet people and strike up conversations with strangers. No matter where you were, on the bus, walking down a street or in a supermarket, people from all ages would talk to you.

It’s all in the little things.

In many ways Scotland reminded me of Vanuatu, where people laughed and smiled more, and where rather than giving you a strange look when talking to them, they actually tarted talking to you.

It will take some time to let all our impressions sink in, but I will write more about Scotland and our experiences – and I will be back, for sure.

There are festivals all year round, but for maximum luxury, forget the tent and hire a tipi, yurt or (promisingly) a ‘cloudhouse’ at the Wickerman Festival.

Piping and drumming accompanies a procession of kilted fire-dancers, right to the water’s edge where they hurl the flames into the sea.

If Scotland’s your destination of choice, then whether you’re planning a castle tour, hiking through the glens or sampling the urban nightlife, a luxury Scottish hotel might just be the perfect place to rest, retreat to, rejuvenate, ready for the next day’s activities, as strenuous or as luxuriant as they might be.

And if you do decide that you can spare the extra pennies for the convenience of an on-site spa, pool, golf course or whatever else you decide is ‘luxury’ to you, then you’ll want to make sure that the rest of your holiday matches up.

Because it’s not just the hotel that should get a star rating.

I hope this helps you plan your next trip or your study abroad in Scotland!

Have fun in Scotland!

18 thoughts on “Scotland: Where To Go, What To See & Things To Eat”