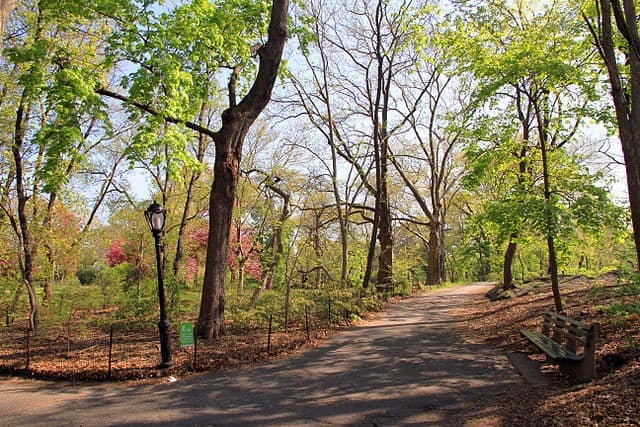 Bow Bridge has been featured in films including Manhattan, Keeping the Faith and The Way We Were. It is just three hundred meters northwest of Bethesda Terrace.

Bow Bridge is made from cast iron and the walkway is ipe, which is a hardwood found in abundance across South America. The wood tends to develop a deep red hue when it is wet.

Known for amazing views of Fifth Avenue and the picturesque landscape, Bow Bridge is definitely one of the top ten things to see in Central Park.

It is around five hundred meters west of Bow Bridge, between 74th Street to the north and 71st Street to the south. The two and a half acres lush garden is dedicated to iconic peace activities, musicians and singers including John Lennon and The Beatles.

Lined with shrubs, rocks, flowers and elm trees, the quiet zone was designed by Italian artists. The Strawberry Fields are a symbolic protest against war.

The nearest entrance is near 72nd Street, across Central Park West.

The Ramble is a wild garden, lush woodland with thirty eight acres of winding paths around there hundred meters northeast of Bow Bridge.

The trails with distinct flora & fauna offer convenient access to a few other major attractions in Central Park, such as Bethesda Terrace.

The Ramble is popular among birdwatchers. The woods are home to over two hundred species of birds.

Alice in Wonderland is an eleven feet bronze sculpture adjacent to Conservatory Water. Alice, as described by Lewis Carroll, can be found here with Mad Hatter and White Rabbit.

Designed and constructed by Jose de Creeft in 1959 using funds granted by George Delacorte, the sculpture is primarily an attraction for kids, who are welcome to climb and crawl over the sculpture.

Obelisk or Cleopatra’s Needle is an ancient artifact dating back to 1450 B.C. There were two such obelisks that were moved to Alexandria from Heliopolis.

Situated just west of the Metropolitan Museum of Art, actually behind if you are taking the entrance at 5th Avenue, the Obelisk is definitely the oldest man-made feature in the park.

The seventy one feet tall structure weighs around two hundred tons and it took four months for laborers to move the artifact from Hudson to its present location.

The Reservoir, also known as Jacqueline Kennedy Onassis Reservoir, spans a hundred and six acres. The water body has a mile and a half long track encircling it, which is quite popular among joggers.

The Reservoir offers an immersive view of the skyline of the great city and it is also popular among birdwatchers for they can spot egrets, herons, loons and coots.

The Reservoir was originally a source of clean water for New York City but it no longer serves that purpose. However, it does provide water to the Lock, Harlem Meer and the Pool.

The Lock was originally intended to be a large lake but it has transformed into a narrow stream today. Nevertheless, it is one of the most tranquil places in Central Park.

Birdwatchers can rejoice and so can anyone looking for an idyllic time in a busy city.

Developed by Vaux and Olmsted, the Lock is half a mile west of the Museum of the City of New York.

Bethesda Terrace is around three hundred meters southeast of Bow Bridge. There are many attractions nearby including Bethesda Fountain, Cherry Hill Fountain, Bethesda Arcade and The Lake.

Bethesda Terrace was one of the first features to have been completed in Central Park. Construction started in 1859 and was completed by 1863.

There is an upper terrace and a lower terrace with grand staircases. The structure is made of New Brunswick sandstone, the steps and landings are granite and the paving is of Roman brick.

The terrace was designed by Calvert Vaux and Frederick Law Olmsted. The place was intended to be the heart of the park, where people could get together and socialize.

Conservatory Garden is less than two hundred meters from the Museum of the City of New York. You can explore the garden from 8am till sunset.

The formal garden has a calm setting. There are no bicyclists or joggers.

You can take leisurely strolls here, explore the natural grandeur of the seasonal plants and if you are lucky to be here when the flowers blossom then it would be one of the rarest experiences you would have in the city.

Belvedere Castle is adjacent to Turtle Pond, half a mile west of the Metropolitan Museum of Art. The place is open from 10 a.m. to 5 p.m. with the exception of Christmas, Thanksgiving and New Year’s.

The castle offers majestic views of Central Park and you can spot Delacorte Theater, the Ramble and the Great Lawn among others.

The castle was not developed bearing in mind any specific purpose. It was simply designed to be a fascinating backdrop with splendid views.

However, Belvedere Castle is used for various purposes today, both for public and private events. The best way to explore the top ten things is by Central Park Pedicab Tours.

And Gossip Girl Tour can save you time, the ride would be convenient and the whole expedition will be affordable too.

Best Ways to Travel From Boston to New York