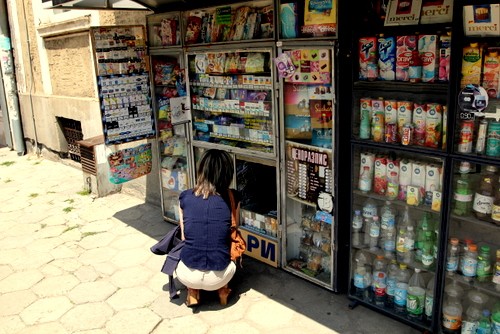 Sofia Bulgaria Travel VIDEO – Heading to a city which had the same name as Sofia was going to be fun – Sofia has dreamed of traveling to Sofia just to see what the city would be like.

The city of Sofia Bulgaria turned out to be pretty quirky, with the main attractions not the most interesting things to see.

Instead it was the Michael Jackson moon-walking traffic light, the fruit and nut kiosks, and the shop windows right down on the ground which made our stay there most memorable.

Passport & customs control banged loudly on the door to our train cabin and entered before I had even had a chance to open the door, in my slumber I wondered why they always had to act as though you were a criminal.

Then the lady looked at my passport, and as though she had heard my thought, she broke into a smile, said ”Sofia!”, turning to her colleagues and said something in Bulgarian.

I had the same name as my destination, which was the only reason I had always wanted to go there as a child.

The city of Sofia turned out to be pretty quirky, the main attractions wasn’t what caught my interest but the small things you notice if you keep your eyes open.

One thing we noticed was the same odd hairstyle that all the girls had, which had obviously become a huge hit in the city.

Old or young, hot or not, they all insisted on dying grey strikes into their beautiful hair.

It was a really odd thing to see everyone, including window mannekens, having this kind of ”Halloween” hairstyle.

You couldn’t enter the kiosks but had to order from a window, which is a common situation in Europe, only that in Sofia the windows were down by your feet…

Seeing men in suits and women in skirts squatting down on the pedestrian street was a common sight here.

Those who felt too awkward squatting would only bend over with their butt in the air when paying the shopkeeper.

Sometimes the kiosk windows were higher – either by your knees or above your head, but one thing was for sure – it was never where it ”should” be.

The thing I perhaps loved the most about Sofia was the ease of finding healthy food.

We found some of the best health restaurants in Europe so far (one even grinding their own flour and another one growing all their ingredients on the Vitosha mountain top nearby).

Knowing that Bulgarian food is not the best cuisine for your shape, it was great to see there were a few awesome options if you felt like it.

But the one thing that caught my eye were these tiny, wooden, super-cute nut kiosks scattered around town – they sold no candy or sweets ONLY nuts and dried fruit.

The old ladies in the huts put your choices of nuts into several small plastic bags and then you paid by weight – it was ridiculously cheap!

Kids, adults and old ladies and men all cued up to these little huts, preferring this snack over chocolate bars and chips.

Sofia isn’t the only place we’ve been in Europe where the “green man” on the pedestrian crossing lamp looks strange.

In Berlin the red men look exactly like the spacetoys in Toy Story, the green one looks like Charlie Chaplin, in France even the Red light men were very well animated with their hands resting on their hips like a cartoon, and in Sofia we saw one green man moonwalking..!

Bulgaria offers plenty for the tourist, and nowhere is this more apparent than when it comes to historical landmarks and structures.

Many sites have become renowned throughout the world, but some may be considered hidden treasures.

Here are Bulgaria’s best historical sites to check out the next time you’re planning a trip.

Bulgaria is famous for its beaches and warm waters, and every summer thousands of western tourists flock to their beaches with a bottle of greasy coconut oil in one hand and a cheap drink in the other.

But Bulgaria is so much more than just beaches, the nature is incredibly varied, and there are some truly amazing historical sites to check out.

All those tourists taking cheap holidays to Bulgaria and only head to the beaches are really missing out on something special.

If you’re planning a trip to Bulgaria, I would definitely recommend you visit the beaches and Danube River Cruise – but do take a few days to explore other gems of the country.

Located 14 km from Varna, this beautiful cave temple is a wonderful place to walk around in for a while.

Nobody knows exactly when it was built, but there is evidence that it existed already in the 10th-12th centuries.

The monastery has clearly distinguished premises for different purposes, arranged on two levels in a 40 meter high limestone rock.

You have the church, the kitchen, the small cemetery church, the refectory, the monastery cells, the crypt and farm on the first level.

The Belogradchik Rocks are a group of strange shaped rock formations located on the western side of the Balkan Mountains near Belogradchik town.

The rocks are red and yellow, some as high as 200 meters, and their incredible shapes are associated with local legends.

Founded in the 10th century by St John of Rila, the Rila Monastery is one of the most popular tourist attractions in Bulgaria.

It’s regarded as one of the country’s most important cultural, historical and architectural monument, and is today listed as a UNESCO World Heritage site.

The monastery is very beautiful, so if you have the time it is well worth a visit.

Located on a hill in northern Bulgaria, Tsarevets was once a stronghold served as the second Bulgarian Empire’s fortress in the medieval centuries.

Walking along the narrow street, you really feel like you’ve stepped back in time, and the views over Veliko and Yantra river are absolutely stunning!

Perperikon is a megalithic Thracian sanctuary located on the Eastern Rhodope Mountains.

More than 8,000 years old, Perperikon was once a royal palace and a center for religious worship dedicated to Zagreus, the Thracian god.

After the Thracians fell from power, other civilizations like the Goth, Romans, Byzantines and Bulgarians came to the place.

Today this is one of the most popular tourist attractions in Bulgaria.

90 km to the east of the Ruse lies the village of Sveshtari, which evidence indicates was a religious and civic center prior to the Roman conquest.

The biggest barrow cluster can be found at the Sboryanovo Historical to the west of the village.

The region has 26 burial mounds and in terms of archaeological importance, has few equals in Bulgaria.

Not surprisingly, the site was named as one of UNESCO’s World Heritage Sites in 1985.

Currently the place is undergoing maintenance and is only open on certain hours.

Legend says that this is the final resting place of Orpheus, but that’s not the only myth surrounding this religious complex.

The site, located 15 km away from Momchilgrad, contains several graves and a fortress that was built in the medieval times.

According to archaeologists, the place was used as a sacrificial ground by the Thracians.

However, there’s more to Tatul than that as it is also a good spot for observing the sun.

The Kazanlak Tomb is the first historical site in Bulgaria to be included in the World Heritage List of UNESCO.

Uncovered by soldiers in 1944, the tomb goes back as far as the 4th century BC.

Due to the ongoing maintenance, access is restricted now, but that doesn’t mean you won’t be allowed.

Just make sure to follow all the guidelines when you visit and everything should be all right.

More than 120 tumuli that have been found around Starosel Village, and though just a few have been studied from the evidence it would seem that they were used by the Thracians as tombs and temples.

Two of these tombs are open to tourists and is definitely worth a visit.

In addition to the historical relics, the village is also known for its wine, and if you’re in the area you should try it out.

The Valley of the Thracian Kings

Last but not the least is the Valley of the Thracian Kings, located in the Kazanlak Valley with more than a dozen tumuli.

From the road heading to the site you can see the major sites, and though some areas are still being excavated, some are open for viewing and worth a visit, making this one of Bulgaria’s best historical sites to check out.