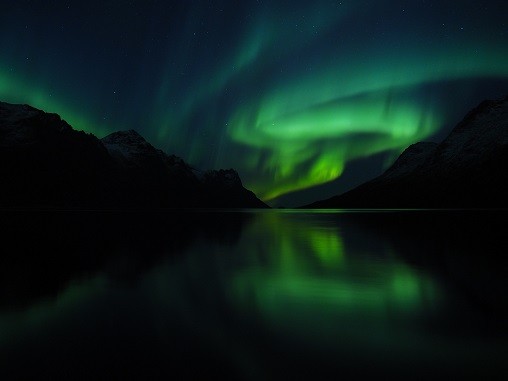 The Northern Lights, a.k.a. the Aurora Borealis, is one of those things that manages to make it onto everybody’s must-see list. It’s for good reason.

The Northern Lights live up to all the hype. But you only have so many days off in a year. How can you maximize your chances for catching the Aurora Borealis?

Where should you go? Which Arctic cruise should you take? What are the Northern Lights and what causes them?

What are the Northern Lights?

When you see the Northern Lights shimmering overhead, you’re actually seeing a kind of force-field at work protecting the surface of the Earth.

The sun has cycles (about 11 years long) where it ups and then descends in the amount of particles in sends out in waves. These waves flare out from the sun in all directions. Some of them naturally cross the path of Earth.

These Coronal Mass Ejections (a.k.a. “solar winds”) are made up of charged particles. These particles meet with our magnetosphere (the magnetic “force field”) that lays in our atmosphere at anywhere from 80 m to 400 km above sea level.

The magnetosphere causes the solar waves to bend and break around the Earth. This mixes them up with oxygen or nitrogen particles in the sky. The different colors of the waves are a result of the different particle interactions and the height they occur at.

Best time of year to see the Northern Lights

The Northern Lights are, as you would imagine, something that requires a night sky in order for them to be appreciated.

Remember, the Arctic receives almost around-the-clock sunlight at the height of its summer months. Therefore, you’re going to want to skip the summer cruises. We didn’t see the Northern Lights but had a great time on our Alaska cruise.

Another consideration, know that Arctic cruises can only run while the waters are ice-free. Therefore, you’re going to want to book a sailing that lands somewhere between December and March.

This is very important.

Cruises can only sail when the waters are open and ice-free, allowing ships to pass.

For the very peak of Aurora Borealis efficiency, you’re going to want to try to get into the strip of geography known as the Auroral Zone. It is found between 66° and 69° north.

The Lights have the possibility of being seen anywhere in the Northern Hemisphere. However, this Zone is a much more active Auroral hotspot than other locations.

That being said, here are a couple of spots around the world that not only offer a good chance of seeing the Lights but also have many charms of their own in case the overhead clouds aren’t cooperating.

Spitsbergen, part of the Norwegian archipelago of Svalbard, offers up some of the Arctic’s beauty in its most natural state.

As you sail under the blue and green curtains of light overhead, you’ll also be treated to pristine icebergs and glaciers along with starkly beautiful snow-capped mountains.

Ittoqqortoormiit, the city found on the east coast of Greenland, is located right next door to the world’s deepest and biggest fjord system, Scoresby Sund.

Also, this means you’ll get the added treat of experiencing the planet’s most beautiful landscapes. And if you are in luck, you will be able to capture its whale inhabitants.

Whales and the opportunity to zone out on the light show overhead. Does it get any better?

Hotel Kakslauttanen can be found in Kakslauttanen, Finland and is just 80km from the Russian border. Accommodation options at the hotel include log cabins with their own saunas and snow igloos.

A round-trip Arctic cruise sailing expedition from the top of Iceland to the island of Grimsey and back is another chance to meet up with the gentle giants of the deep (especially Minkes, as well as White-beaked Dolphins and Harbour Porpoises) while sailing completely clear of any sort of man-made light pollution.

Ready to enjoy the vacation of a lifetime. When planning your trip around seeing the Aurora Borealis, be sure to maximize your vacation by going the right season.

If you choose a cruise, this is important as well.

Iceland’s Blue Lagoon is the perfect choice for those wishing to warm up their northern lights experience. The lake is a light, opaque blue and its mineral waters provide an idyllic spot from which to lie back and observe the spectacle of the aurora borealis.

The Blue Lagoon is not the most common place for the Northern Lights to occur. Those who luck out at the Lagoon can easily take short night-trips to several nearby destinations where the lights are more frequently seen.

For those trying to find a gift for someone adventurous who’s into everything from zorbing to ice-skating, giving the gifting of a trip to the northern lights is sure to be a present that won’t disappoint!

The Icehotel in Swedish Lapland has gained international fame, and you can see why: Built entirely from ice and snow, this frosty marvel is completely deconstructed and reconstructed every year as the seasons change.

Located in Jukkasjarvi, visitors from the UK can take a direct flight to nearby Kiruna. The Icehotel is located in the part of Sweden that, during January, has the highest number of clear days, making it well placed for viewing the northern lights.

The hotel now offers guided northern lights tours for its guests. Leaving the hotel every night at 11, the guides take guests to the most active spot for the lights on any given evening.

The Best View of The Northern Lights Fairbanks, Alaska

For those coming from Canada or the United States, Fairbanks in Alaska, is a great destination for laying eyes on the northern lights.

The advantage of Fairbanks is that once you’ve arrived in the city, you don’t have a long and complicated trek ahead of you to find a spot where the lights are visible. They can, in fact, be seen from the city, but most choose to take a trip away from the distraction of the city lights.

There is a beautiful viewing area in the hills of Fairbanks just 32 km away from the city. One of the reasons Fairbanks is so popular is because of its proximity to the highly active area over the Arctic.

The aurora borealis is often brightest and most frequent at Fairbanks and the long nights there mean there’s plenty of time to take in the show.

When taking a picture of the lights, it helps to have something relateable in the shot to emphasize just how sweeping the Northern Lights truly are.

Line up a mountain, your ship, or one of your friends in the picture. This will give the whole frame a sense of scale.