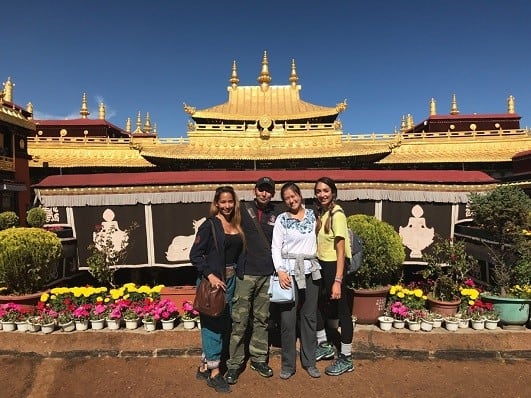 Lhasa Buddhist Temples are a must see in Lhasa, the capital city of Tibet.

Lhasa has many names — Roof of the World, City of Sunshine, and Land of Gods to name a few.

It is called ‘Roof of the World’ as it is one of the highest, habitable cities in the world.

It is called the ‘City of Sunshine’ as it receives a lot of sunshine compared to other places in Tibet.

Also, it is known as the ‘Land of Gods’ as Lhasa is the spiritual center of Tibet.

Lhasa has some of the most important palaces and monasteries within Tibet.

These palaces and monasteries are of cultural and religious significance.

For hundreds of years, people have protected, maintained, and rebuilt them.

Here are some of the top Buddhist attractions you must visit in Lhasa to start your Tibet tour.

It is necessary to know more about their religion, culture, and way of life.

Jokhang is one of the important Buddhist temples in Tibet.

Many consider it to be the spiritual center of Lhasa.

Jokhang Temple is more than 1,000 years old and is located in the center of the city.

You can see many roads and paths diverging from the temple.

Since its conception, restorers have renovated the temple a number of times to preserve and safeguard it against the modern development.

What to see at Jokhang Temple

The temple is also famous for its architecture which is said to be influenced by Indian, Nepalese, and Tibetan style.

Jokhang Temple is the best place to get a peek into the religious lives of Buddhists.

One of the things that make this temple an important spiritual center is the life-size image of 12-year-old Jowa Sakyamuni.

It is about 1.5 m high. It is a revered treasure of the temple.

Inside the temple you can many paintings depicting the ancient times in Tibet.

From the golden roof of the temple you can see the full view of the beautiful Potala Palace.

You will further see prayer halls and chapels throughout the temple.

Surrounding the temple is the Barkhor Street which has many old shops lined up.

It also serves as a kora path for the pilgrims; it takes about 30 minutes to circumambulate the temple in Barkhor Street.

This UNESCO World Heritage site is the star attraction of Lhasa.

Potala Palace looms over Lhasa so graciously and magnanimously.

This palace was constructed by 5th Dalai Lama in the year 1645.

Sitting at an altitude of 3,700 m on top of the Marpo Hill, this palace symbolizes Tibetan Buddhism.

Potala Palace is one of the highest ancient palaces in the world.

This palace is 13 stories high with more than a 1,000 rooms and spans over an area of 13 hectares.

Potala Palace is famed for its architecture, artworks, murals and ancient religious treasures.

This was once the winter palace of Dalai Lama.

Today it is a religious place, tourist attraction, and a museum.

The palace is built in woods and natural stones like granite.

The fortress-like walls surrounding the palace will leave you with a lasting impression.

There are beautiful carvings and paintings that tell us about the glorious days of Tibet.

Main parts of the Potala Palace

There are two main parts in the palace: the Red Palace and the White Palace.

The Red Palace is in the center and consists of Buddhist halls, libraries, prayer halls, golden stupas, and chapels.

The White Palace was where Dalai Lama used to stay while visiting.

It was the office for handling political and religious matters.

There are statues of many important people who contributed to Buddhism.

They only allow a limited number of people inside the palace every day.

Therefore, it is important for you to book the tickets in advance to witness the inside of this beauty.

To get a full picture of the palace, go to:

During the nights, the palace looks lit up with all the lights lining every edge and corner of the palace.

Gelugpa is a sect that follows the latest school of thought in Tibetan Buddhism.

Also, known as the Yellow Hats Sect, it was founded by Tsongkhapa in 15th century.

Around 17th century, this school of thought spread widely and many practice it today.

People built many monasteries following Gelugpa school of thought all around Tibet.

In Lhasa, the three most important Gelugpa monasteries are a popular attraction for those who want to know more about the religion and culture of people who follow Buddhism.

The devoted followers and students of Tsongkhapa built these monasteries.

Standing at an elevation of 3,800 m on the side of Wangbur Mountain, Ganden Monastery was built in 15th century.

It is a large monastery with more than 50 buildings inside it.

The main attraction is the Tsochin Hall with 100 massive pillars.

With beautiful scenery surrounding the monastery, you can hike around with the pilgrims performing Kora.

You can also trek from Ganden Monastery to Samya Monastery where you be hiking across small valleys, temples, lakes, and ancient villages.

Built in the year 1419, Sera Monastery is located in an area where wild roses bloom every year.

This monastery houses three colleges of which Sera Je College is the most popular.

Visitors can tour this college and see the many spectacular Buddha statues and stupas.

The main attraction of this monastery is the debating sessions that happen at 3:00 pm.

Except Sundays, monks gather in the courtyard at 3:00 pm to debate.

Visitors can witness the debate but cannot take pictures of them.

You will see junior and senior monks clapping loudly and debating vigorously to make their point.

Located at the foothills of Gambo Utse Mountain, this monastery looks like a white heap of rice.

It is respected as the Mother Monastery of Dalai Lamas’ owing to the fact that many Dalai Lamas have studied here.

At one point of history, Drepung Monastery was the largest monastery in Tibet and housed as many as 10,000 monks in the monastery.

Today there are only around 700 monks.

There are four academies in the monastery.

In the forests surrounding the monastery, there are many courtyards.

One of the main highlights in the monastery is the 15 m high Maitreya Buddha statue.

Remember, Tibet is a place where people’s way of life and religion are closely intertwined.

The holy sites of Tibet carry history and stories of the past which the devout locals still preserve.

Visiting the Buddhist attractions (Tibet in April) will be an enriching experience.

Top Things to Do in Nepal