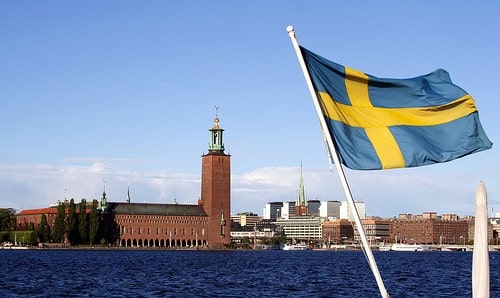 Best Time to Visit Stockholm Sweden ~ Stockholm Weather – Stockholm is unarguably one of Europe’s most beautiful cities, and everyone I’ve met who has been there has had a great time. There is, however, nearly always one complaint – the weather in Stockholm.

“The people are friendly, the city is beautiful, and there’s so much to do in this capital city – but the weather in Stockholm is horrible!” – is usually how it goes.

Visitors to Stockholm may think it has a really harsh climate; however, compared to other far north countries, it’s considered relatively mild.

And when the weather Stockholm is nice, it’s absolutely amazing!

A city of wonders any time of the year, Stockholm is particularly magical during the summer months due to the season’s warm temperatures and long daylight hours. Tourists arriving during June and July are treated to midnight sun. Anyone coming to Sweden between September and April to see the northern lights certainly won’t be disappointed when they roll into Stockholm. The snow blankets that cover the city from November through March create a cozy vacation experience. The Stockholm Christmas markets that run during November and December offer unique opportunities to explore stalls of crafts, mulled wine and sweet pastries.

Choosing a time to visit Sweden comes down to the experience you want to have. If you’re seeking the whirling, rippling ribbons of light that cover the sky during winter, come during “northern lights” season from September through April.

The best time to visit Stockholm is in the summer months. However, know the summer is when it will be the most crowded as well as the most expensive.

Sweden’s climate is impacted by the Gulf Stream, flowing from the west coast of Norway. This makes this country considerably milder than other countries in the high northerly latitude.

Located on Sweden’s east coast, the capital city of Stockholm encompasses 14 islands. Much of the city is made up of waterways. There is steady precipitation throughout the year.

Locals and tourists alike capitalize on the warmer weather when it comes. During this time, people want to do nothing else but go outside to enjoying the weather and the long daylight hours.

Stockholm Weather in the Summer

With mild summers, if you are planning on visiting Stockholm, this is when you want to go. June to August are typically the best months to visit Stockholm. It’s the warmest time of year.

July is the hottest month in Stockholm.

The summer season in Sweden really is unlike most other countries in the world. It seems like the sun never sets! Toward the end of June, daylight peaks in Stockholm:

There are over 18 and a half hours of daylight each day.

The summers are packed with locals and tourists in Stockholm. You can enjoy the best of Stockholm at this time of the year. The fact that you can go swimming in the middle of the city is pretty special, but there are also islands to explore.

At this time of the year, there are tons of things to do. You can enjoy island hopping, outside concerts, canoeing, etc.

Stockholm Weather in the Off Season

Although the summer season may be hotter and sunnier, I would like to give a shout out to Stockholm in the off seasons as well.

Spring and early autumn can be nothing less than stunning. Stockholm is a very green city, and seeing the city come to flourish in spring time is amazing.

This is a beautiful time to walk around in parks, and in the city. Much of the city is made up of parks and greenspace. It’s not packed with tourists, and you can still enjoy a hot chocolate on an outside seating at a café.

The early autumn is just as beautiful, with the color changes in the nature. Often the weather is really nice at this time of the year, chilly but clear skies. Some people actually like the spring and autumn more than the summers.

The best month to enjoy Stockholm in the springtime is in May, while the early autumn in September is amazing.

Best Time to Go to Sweden

Sweden truly delivers for those looking for everything from picturesque wintertime getaways to endless days of summer spent on sparkling lakes. For warm temperatures and long days that offer up to 18 hours of sunlight, book a trip between May and September. For access to the splendor of the northern lights, focus on September through early April.

Stockholm Weather in May and September

The winter season is cold and dark. At its darkest, in December, there are just over six hours of daylight. Usually January is the coldest month. Average low temperatures are -3.7 degrees C (25.3 degrees F). 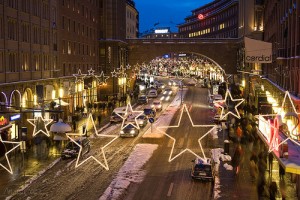 Visiting Stockholm in the Off Season?

Snow is common in Stockholm, and the old town looks really cozy at this time of the year. If you go there before Christmas it’s especially nice since they have put up Christmas decorations everywhere and you can take a visit to the Christmas market.

Another nice place to visit on a clear day is Skansen, which is open all year round. They also have a Christmas market, as do Gröna Lund (the theme park).

While it’s lovely visiting Stockholm to experience Christmas traditions, the best time to visit Stockholm for more of a “sure thing” weather-wise is the Stockholm Sweden Weather in the summer.

There are few places in the world like Stockholm, combining the best of both worlds – literally. The city is a vibrant cosmopolitan place with great shopping, fashionable people, lots of bars and clubs and great little boutiques.

At the same time you’re always surrounded by water, as it’s situated on 14 islands, and the nature is just around the corner. The water is perhaps the best example of combining the best of both; it’s salty AND sweet at the same time!

To read more about our time in Stockholm, make sure you check out Stockholm Sweden Video.