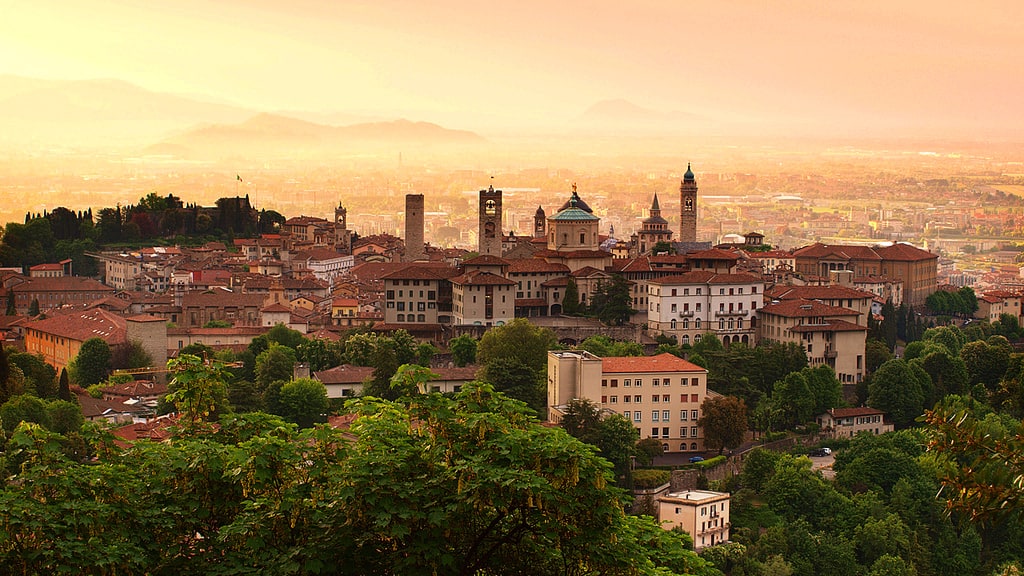 When landing at Bergamo airport the message was clear: take the next bus to Milan and leave this place ASAP.

The push to get people to Milan started already in the air, where you could pre-purchase your bus tickets straight to Milan.

When stepping out of the airport – which for the record is called “Milan” by Ryan Air, there were so many buses waiting to bring everyone to Milan that the old little local bus (discretely named Linea 1) going to Bergamo was left unnoticed.

Only a handful of us went against the stream and got on the bus to explore what seemed to be a forgotten place: Bergamo.

We had been to this little city once before as a simple stop-over before flying out of Italy, and fell so much in love with it that we said we would be back one day to see more.

So when Bergamo showed up as a great deal on the “Everywhere feature” we used with Skyscanner (it scans the web for all flights leaving your departure city to anywhere in the world), we knew it was meant to be.

I was surprised to see that the city didn’t seem to have become more popular since last time we were there.

But while walking along the streets of the old town, I felt a sense of relief – there were no crowds of tourists, no tour groups, just a relaxed vibe and quiet streets.

I couldn’t help but to wonder if perhaps the people of Bergamo don’t want everyone to know about their lovely town, to keep it the way it is and let the jam-packed buses with travelers continue to Milan instead.

Well if that was the case, I’m happy with that – more space, no queues, no stress and beautiful surroundings – perfect.

The town is divided in two parts, Lower Town and Upper Town – the Upper Town is the medieval part of Bergamo, and the small size makes it perfect for a day’s of exploring, giving you plenty of time to relax – be it in a garden cafe with a spritzer at midday, or in the botanical garden with a gelato.

We never thought it was possible to feel fat and starved at the same time, but Portugal showed us otherwise.

Being a vegetarian in that country is hard, but being a healthy vegetarian is impossible.

Italy, on the other hand, soon showed us how you could eat all the fat foods you wanted, and still feel healthy about it.

All the foods you would normally associate with grease and fat – tasted so god damn good that you could pretend you were being healthy.

Indulging in pizzas with that thin, crispy crust, impossibly creamy gelato, spritzers and wine at noon – I couldn’t help but to understand exactly how this woman must have felt….!!

After having traveled all over the world since last time we visited Bergamo, we were happy to find that it was still very much the way we remembered it, a cozy town that gives you the ultimate Italian experience, but without the fuss.

Best Time to Visit Italy
Best Festivals in Europe
Best Food City in Italy ~ Best Places to Eat in Italy
Turin Italy Forgotten Food Capital
Best Time to Visit Bergamo Italy
Bergamo – The City Milan Doesn’t Want You To Visit!
How Do I Use My Cell Phone While Traveling to Europe

10 thoughts on “Bergamo – The City Milan Doesn’t Want You To Visit!”