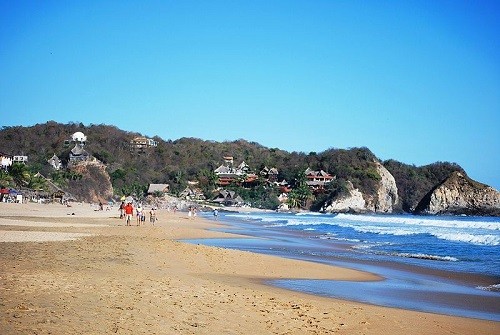 Dangerous Swimming Spots From Around The World – I absolutely love the water and swimming, but there have been a few times where I was so grossed out or scared that I simply wouldn’t go close to the water – however, the places I’ve been to are nothing compared to the places below.

Dangerous Swimming Spots From Around The World

Today I will share with you some of the most dangerous swimming spots and locations from around the world – so watch out:

If you want to avoid respiratory infections, rashes, meningitis, pinkeye, stomach problems or hepatitis on your summer vacation, make sure you go somewhere else!

The Beach Of The Dead, Oxaca, Mexico

So tempting, but also SO lethal!

This beach, more commonly known as Playa Zipolite (which in the Zapotec language means “beach of the dead”), has crazy strong rips and undertow currents that change all the time.

During the “rebalses” (rebel) period it’s pretty much impossible to swim here, but the beautiful beach continues to lure in travelers.

Thankfully there has been a lot less accidents since they started hiring lifeguards to work there.

Check this – 11% of all shark attacks on humans worldwide have occurred within the red triangle (Bodega Bay, north of San Francisco), a popular place for divers and a surfer’s paradise.

The reason is because the area is full of seals, sea lions, elephant seals – i.e the favorite meal for great white sharks – so maybe don’t go surfing there :p

Jelly Fishes In The North East Coast Of Australia

Australia can be one dangerous country – before going there it seemed to me as there wasn’t one place in the whole country you could feel safe.

Although once I was there, I realized you can’t go around worrying about what might happen, and I took on the Aussie mind set – either it happens, or it doesn’t.

Despite the 3 recent shark attacks in the area I still went surfing.

But sharks aren’t the most dangerous creatures in the Aussie waters – the Box Jellyfish is.

These almost invisible jellyfish are among the most venomous creatures in the world (over 5 and a half thousand deaths since the 50’s)!

They’re found in the waters from Darwin down the eastern coast to Queensland during October – April.

How would you like to be carried toward the edge of a 100 meter drop of the world’s largest waterfall?

The Devil’s Pool is an infinity pool created every year at the edge of the Victoria Falls, when the water levels reduce (if you try to go swimming there at any other time of the year you can count yourself dead).

If you’re brave enough, you can let the stream take you in high speed towards the edge, where the rocks stop you ONLY inches away from the 100 meter waterfall.

15 thoughts on “5 Dangerous Swimming Spots From Around The World”