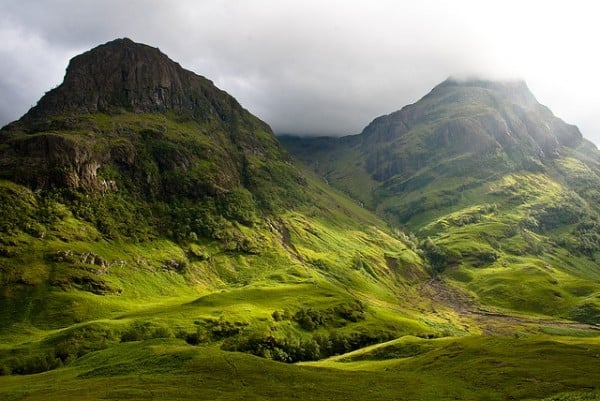 If you want a fun twist on your travels through Europe, you can plan your trip between the many film locations of your favorite movies.

Countless movies have been filmed at the most beautiful places in Europe, below are a few places to get you started:

Many of the scenes in Braveheart were filmed in the beautiful Scottish Highlands, in and around Glencoe, Glen Nevis and the Mamore mountains.

Wallace’s trek along the amazing mountain path is filmed on the Mamores mountains, a group of ten mountains linked by a narrow bridge stretching between Loch Leven and Glen Nevis.

If you’re fit you can walk the trek in a day, and access the ridges from Glen Nevis.

James Bond ‘For Your Eyes Only’ – Thessaly, Greece

If there is one movie character who really has been all over the world, it’s James Bond. He is a true vagabond and has been to some of the most beautiful places in Europe.

In the movie For Your Eyes Only from 1981 he spends some time in Greece. Two big scenes are the balcony scene in Corfu at the Achillion Palace, and at Agia Triada (Holy Trinity) monastery in Meteora.

It’s hard to believe that this monastery actually exists, but fortunately it does, and anybody is welcome to visit.

A charming movie with beautiful colors and setting, Amélie from Montmartre makes you want to take the next flight to Paris, head straight to Café des Deux Moulins, an art deco cafe and sample the Creme Brulée, which is now named after Amélie.

The café is where Amelie worked as a waitress in the movie.

The metro station Lmarck-Caulaincourt with the double staircase is not far from there, which is where Amélie takes a blind man along with her and describes all the beauty around them and the mouthwatering sights on the market on Rue Lamarck street (my favorite scene).

The beautiful beach Freshwater West was the perfect location for Bill Weasley and Fleur Delacour’s Shell Cottage. It’s easy to understand why they would choose to film a scene at this place, the sweeping sand dunes and long stretch of golden sand is picture perfect.

While the holiday cottages in Wales are cute, they would never beat the adorable Shell Cottage in this film, where the roof is covered in seashells.

Unfortunately the cottage isn’t there anymore and was only there during the filming, but the traditional cottages in Wales do a pretty good job in the ‘cozy’ factor as well.

The beach can also be seen in the background in the Robin Hood film from last year, when they fought with the French – but there is another good reason to visit the Freshwater West: it’s known as the best surf spot in Wales.

The Venice carnival scene was filmed on the famous Piazza di San Marco, something which they were themselves happily surprised that they were allowed to do.

This movie will definitely make you want to visit Venice, and if you’re already going there – you have to watch this movie first!

I could go on and on about movie locations in Europe, especially in the UK with all its castles and where many of the famous costume films like the Tudor have been filmed.

21 thoughts on “5 Amazing Film Locations In Europe To Visit”